Technical analysis of the Williams FW42: new decoration and sponsors

The Grove team, Williams, has presented his new work of F1 2019, the Williams FW42 car that will face this new world championship with aspirations to improve last year and fight for not being the last, although they will have it complicated. In addition, they do it with a long-awaited return, that of Robert Kubica who returns after his rally accident that has kept him away from the cars for several years, and we had only seen him in tests with some teams.

But this season, Russel and Kubica are in charge of piloting the FW42 and taking it as high as possible within the benefits offered by the new car. In addition, they lost their main sponsor Martini, who fulfilled contract and did not renew. Something critical for the economic problems that the team is going through and urgently needed new sponsors in its white chassis, and not only was it white because of the color, but because they did not have too many sponsors in it. 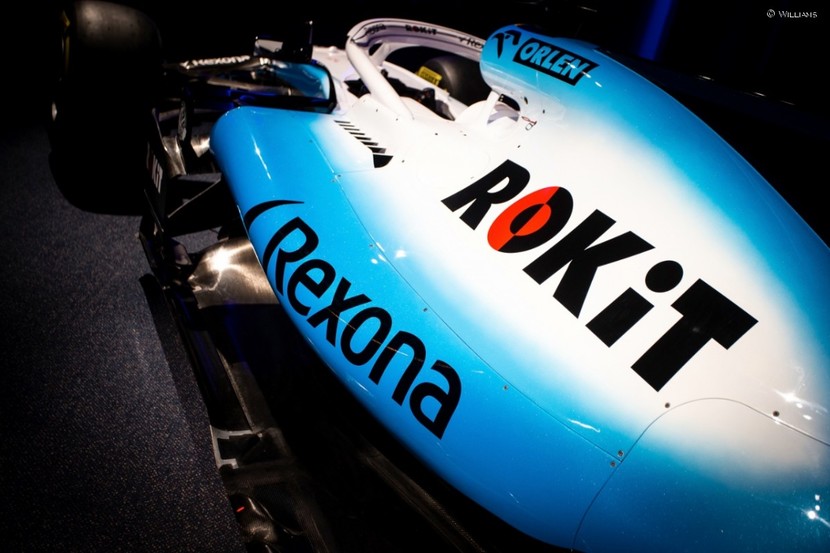 Williams has secured more funding for the new car, and they have replaced the Martini brand with a new main sponsor that gives its name to the new team. This is the technology company ROKit . The company is dedicated to mobile telephony and it seems that they will be a technological partner beyond sponsoring, with which Williams Racing will be able to offer the public 3D content without wearing glasses thanks to this association. Both parties have been very satisfied because they obviously benefit from the agreement, but it is not the only brand that joins the team. So does James Harvest's clothing firm of sportswear ...

You already know that rumors about a possible purchase of the equipment by US equity funds. or China has not been done. The team remains the same and there was no possible change of engine, as it seemed that could be with the purchase by those funds. So they continue with the agreement signed with Mercedes , and will use their engine and gearbox this new season once again. If Mercedes gives them a very powerful engine, they will surely fight in the back area of ​​the grid, because I do not expect a radical change for the team and that they can suddenly fight for the upper middle zone ... 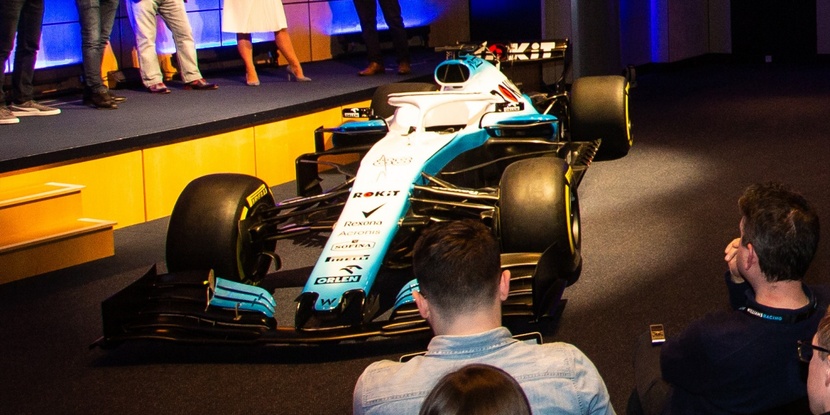 If we appreciate the nose , it is quite similar to last year, with the typical nose that enforces the regulation of the nose, but leaves two small air channels to go back. The front wing is quite simple, adapting to the new regulations this year, without profiles on the ends with 6 elements and fairly simple endplates without any type of deflector, channels, etc. In addition, the main plane of the front wing is quite straight, and those profiles that I cited in the technical analysis of the Toro Rosso do not appear. And if you notice, they have not painted the wing completely, but have left it bare, in uncoated carbon fiber. I guess to save some grams of weight and perhaps distribute the ballast more adequately in the face of vehicular dynamics ...

The brake ducts have a bulletin down, something that I have not seen in the Haas or in the Toro Rosso, since we remember that the new regulations of the FIA ​​for this year involved that longer battle for a larger fuel tank, the simplified and wider front wing, the rear one as well, and that the brake lines did not have complex aerodynamic profiles like last season.In the middle area we see that there are two aerodynamic planes with some supports anchored to the pontoon that remind in large part to the design that Ferrari presented two seasons ago. That is, if you look, it has two horizontal profiles just in front of the air intake of the sidepod that come out to join with those aletines that I say. But they are not directly linked to the pontoon itself, which leaves a gap that can be seen from above as in the Ferrari.

In the case of the Williams, it is surprising that the mirrors mirrors

They have hung them quite high compared to the two previously seen models, which are somewhat lower. If we return to the nose again, it is not appreciated that there is a slot for the S-Duct, so we can imagine that they will not implement it for the moment. 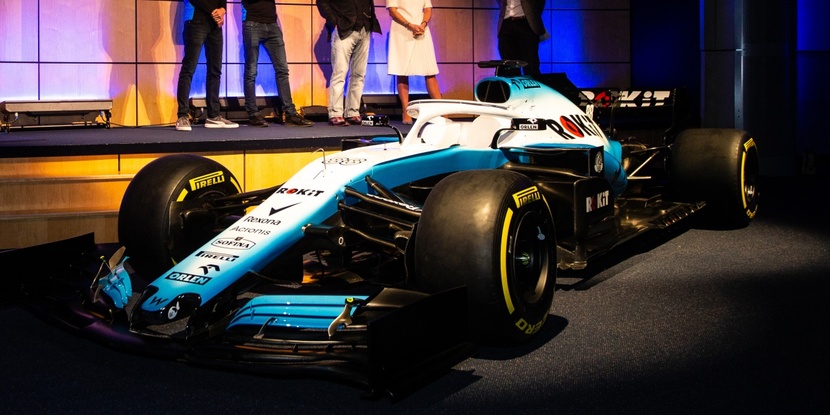 Certainly, the color has improved with respect to last year and at the technical level it is also seen an advance in front of that Williams so simple and minimalist at aerodynamic level that we saw in the past seasons, what made the results were not good and becoming the last team with difference last year. A hard stick for those of Grove who will try to overcome it with this new design that will pretend to be something above. Although we remember that there are no miracles in F1 and that they will not go on to fight for podiums, much less as in the past.

The airbox is of the style of the new hybrid era , that is, of a large size compared to atmospheric engines. In principle it might seem a contradiction, since the turbo would need a smaller intake to get the air intake they need to have the air compressor, but it turns out that being turbo engines have additional elements that need to be cooled. One of these elements is very important, such as the intercooler, and the other the deposit of acetie of the gearbox and the ERS, that is why it has several air dividers inside the opening to redirect the air through different internal conduits./p> 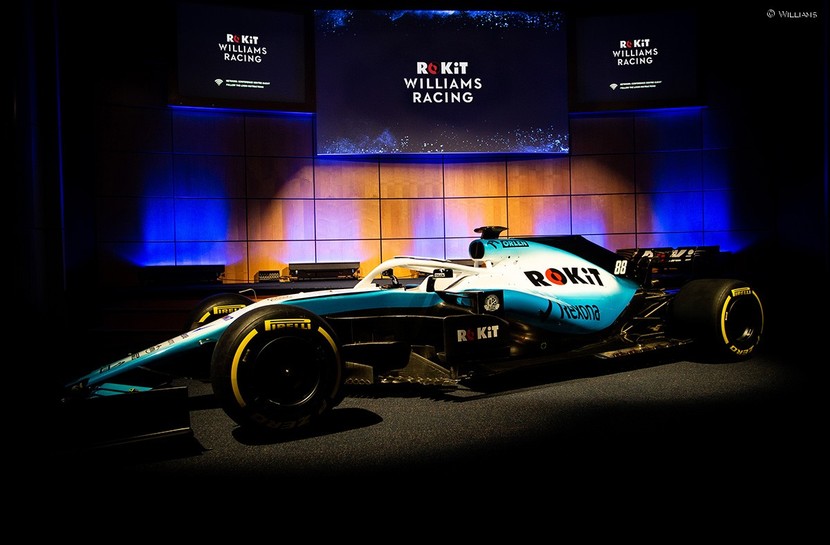 As for the middle and the flat bottom , is very worked. We have seen some progress with respect to the past year in complexity. I hope that gives them a plus load and aerodynamic efficiency to Grove and not see a team as historic as this one so far. If you look at the edge of the flat bottom, the carbon fiber has been worked with a few cuts typical in many teams to try to seal or that the rear tire affects as little as possible to the air traveling under the flat bottom with dirty air or turbulence generated by the rear wheels.

We see the shark fin also very similar to the Toro Rosso and the Haas, which as you know, last year there were changes in the regulations, and they are smaller. Besides not allowing those wings of T we saw in the past so great. But a gap in the regulations has allowed in the lower area, just where the rear axle, there is a legal vacuum and some last year mounted some profiles, yes, smaller and simpler. Remember that the monkey seat is not allowed either, which subtracts charge in the back area (little, but it shows). 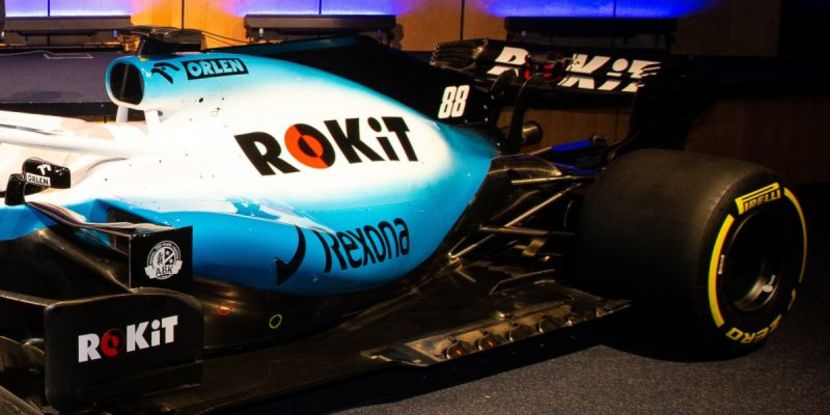 In this last image, we can better appreciate the pontoon, with those wing supports just in front and the gap between them and the air intake itself, as I said before. In addition, they have raised something and reduced in size to reduce the drag and leave a channel in the area below to travel more air to the rear area outlining the pontoon and engine cover.I suppose that in circuits where more refrigeration is needed or more heat, they will open it as they always do. The truth is that the solutions we see in terms of the middle area are quite common, we will see if any surprise us among those who need to present ...

Again, as is logical, they do not let us see the diffuser. But we can appreciate the rear spoiler , bigger and with a curved main profile, with two central supports instead of just one around the exhaust (which has a little inclination to blow just under the aileron). Also, there are brochures in the endplates, but they are right on the edge, they are dcir, they do not have edges. In principle, this year banned horizontal bridles in the rear endplates ...? And by the way, one detail, is that all cars must have LED lights placed on the rear endplates to improve the visibility of the car in extreme track conditions.

I am surprised to see those profiles under the front wing of the car. STR14 and those brunquias in the FW42, since if it does not recur badly, the technical regulations of F1 2019 forbids it . Maybe I'm wrong? Maybe some have found legal gaps in the regulation and implemented it in a way that violates the rules without becoming illegal?